Latest News
Pompeo ‘Happy’ to Pontificate in Tehran, Revealing US Tyranny of ArroganceSayeeda Hussain Warsi, Baroness Warsi  When giving all, is not enough.Lack of colonial baggage & investment in peace put Russia ahead of other players on African continent, SA minister tells RTGod Bless America.?The US/UK trade deal is truly frightening – here’s what’s comming.Adobe-do-be-do: Europe shouldn’t underestimate US software powerLibya was destroyed due to Western leaders’ lust to continue exploiting Africa’s riches – Gaddafi spokesmanRepublicans Want a White Republic. They’ll Destroy America to Get ItThe End of White America Is Now AssuredThe West Oppressed the Third World for So Long It Became the Third World ItselfA Society Is Only As Free As Its Most Troublesome Political DissidentSeveral Reasons Why West Papua Should Get Its Freedom… Immediately!The Last Act of the Human ComedyTexas police leading black suspect by ropePompeo ‘Happy’ to Pontificate in Tehran, Revealing US Tyranny of ArroganceThe British Council is embroiled in scandal across the worldDirector stresses claim about plot to spread AIDS in AfricaWhere Is Wikileaks when you need them.Fear vs. FearGo There Tiger
News Info
July 18, 2017 by admin
0 0 0 0 3 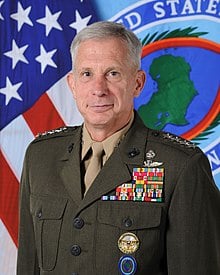 The creative “Democratic Security” (counter-Hybrid Warfare) model that Russia is successfully applying in the Central African Republic prompted the head of AFRICOM to warn about its possible export to other African countries, which terrifies the US to no end because it stands a very realistic chance of losing the continent to Russia instead of China unlike what “conventional knowledge” would have otherwise assumed.

AFRICOM commanderGen. Thomas Waldhauserwarned the Senate Armed Services Committee on Thursday about the possible export of Russia’s security model all throughout the continent to countries “facing similar instability and unrest” to the Central African Republic (CAR), the war-torn landlocked state in which Russian military trainers have been operating for over a year with UNSC approval. Here are the relevant parts of his testimonyon this topic:

“By employing oligarch-funded, quasi-mercenary military advisors, particularly in countries where leaders seek unchallenged autocratic rule, Russian interests gain access to natural resources on favorable terms. Some African leaders readily embrace this type of support and use it to consolidate their power and authority. This is occurring in the Central African Republic where elected leaders mortgage mineral rights — for a fraction of their worth — to secure Russian weapons. They want to have influence on the continent.

I would just point to the Central African Republic right now where the Wagner group has about 175 trainers, where some of the individuals are actually in the President’s cabinet and they’re influencing the training as well as the same time having access to minerals in that part of the country. With minimal investment, Russia leverages private military contractors, such as the Wagner Group, and in return receive political and economic influence beneficial to them. Recently, the President of the Central African Republic installed a Russian civilian as his National Security Advisor.

The President also promised the armed forces would be deployed nationwide to return peace to the country by forces likely trained, equipped, and in some cases, accompanied by Russian military contractors. Russia’s ability to import harsh security practices, in a region already marred by threats to security, while systematically extracting minerals is concerning. As Russia potentially looks to export their security model regionally, other African leaders facing similar instability and unrest could find the model attractive.”

In a nutshell, what Waldhauser described (albeit in a very negative light) is what the author previously wrote about last May when analyzing the application of Russia’s “balancing” strategyto Africa:

“Russia’s involvement in African conflict resolution processes could expand from the initial military phase to a secondary diplomatic one in making Moscow a key player in any forthcoming political settlements there, provided of course that its national companies can be guaranteed privileged access to the said nation’s marketplace and resources. This win-win tradeoff could appeal to African elites and their Chinese partners alike, both of which don’t have the combat or diplomatic experience that Russia has earned through its anti-terrorist campaign in Syria and attendant Astana peace process to handle the coming Hybrid War challenges ahead. So long as Russia exercises prudence and avoids getting caught in any potential quagmires, then it can continue to “do more with less” in “cleaning up” the many messes that are predicted to be made all across Africa in the coming future.”

The gist is that Russia’s indirect military support to the UN-recognized governments of conflict-stricken “Global South” states such as the CAR can be leveraged to receive preferential resource and reconstruction contracts after the war ends, with a political solution being facilitated by Moscow’s mediating efforts, after which the Eurasian Great Power can comprehensively assist in “nation-(re)building” through such efforts as educational support, electrification of the country, etc.

Suffice to say, Russia has thus very been wildly successful in the “test case” of the CAR, seeing as how the country’s armed parties just agreed to another peace treaty. While this pact is the eighth such one to be reached since the conflict started in late 2012, it’s the first one to be concluded as a result of direct dialogue between all sides, which was jointly facilitated by Russia and its close regional partnerSudan through a series of meetings that took place in the latter’s capital.

Although the details of the Khartoum Agreement have yet to be officially released, it’s been widely reported that an amnesty will be granted, an inclusive government will be formed, rebel forces will integrate with the military, and a truth and reconciliation commission will be established. The first three of these four mains interestingly resemble the peacemaking approach that Russia is attempting to advance in Syria, proving that Moscow is applying its experience from one conflict to another.

The Modern-Day “Scramble For Africa”

It’s precisely because of the successful export of the Syrian model to the CAR and the latter’s recent Russian-brokered peace deal that Waldhouse felt compelled to make his remarks about the further export of this developing model all throughout Africa because of what he worries will be its attractiveness to other similarly conflict-plagued states there, both those that are presently destabilized and those that might soon be as part of the US’ fierce competition with China there.

About that, the US is tacitly assembling an impressive coalition of countries including India, Japan, France, and the UAE to compete with China in the modern-day “Scramble for Africa”. Officially speaking, this competition will only remain in the economic realm, but the Pentagon will almost certainly resort to sparking various Hybrid Warsas it seeks to gain the upper hand against it rival, knowing that the Achilles’ heel of China’s Belt & Roadvision is its inability to provide physical security for its investments.

That being the case, Russia’s “Democratic Security” (counter-HybridWarfare) model takes on an even greater significance in the grand scheme of things since Moscow is proving itself to be the only actor capable of countering the US’ disastrous proxy designs against Chinese Silk Road investments there. Its indirect employment of cost-effective and low-commitment means for stabilizing the CAR can easily be modified for any number of countries that find themselves in a similar situation, hence the US’ unease.

Not only can Russia use this to its own advantage and that of its many prospective partners in Africa, but it can also be of supreme strategic value to China as well in providing the only tried-and-tested method for protecting its Silk Road investments from US-orchestrated Hybrid Warfare plots. This could in turn incentivize China to have some of its state-owned companies “open up” access to their Russian counterparts in the many African markets where they’re predominant.

The Benefits Of “Balancing”

In this manner, Russia could ensure that its “Democratic Security” model provides promising opportunities to its businessmen instead of just its military-industrial complex and diplomats, contributing to the formation of a comprehensive African strategy in which “balancing” brings economic dividends for its own people as well as the local ones benefiting from Moscow’s involvement in mediating political solutions to their armed conflicts via the aforementioned indirect means.

Without Russia’s security and state-(re)building support as described in this analysis, China will be unable to maintain its game-changing presence in Africa in the face of the US’ forthcoming Hybrid War onslaught, hence why Waldhauser sought to fearmonger about Moscow’s “Democratic Security” model by portraying it as an unethical means through which corrupt leaders “consolidate their power and authority” in exchange for selling their natural resources for bargain-basement prices.

This weaponized narrative is intended to appeal to three difference audiences; the domestic American one is supposed to understand that their country’s forthcoming intensified involvement in Africa is about “safeguarding and spreading democracy”; the US’ international partners will interpret it as the “support of American values” abroad; and the target country’s anti-government activists (including “rebels”) might understand that the US will covertly support their regime change movements.

It’s important to point out that Russia’s “regime reinforcement” strategy of exporting its “Democratic Security” model to conflict-ridden states isn’t being implemented for the sake of “solidarity with authoritarian regimes” and/or “oligarchic greed” like the US alleges but to constructively counter very serious Hybrid War threats that could destabilize entire regions if left unchecked like what previously happened in the Mideast prior to Moscow’s 2015 military intervention in Syria.

Moscow As The African Kingmaker

Unlike that much more dramatic and directly waged campaign, Russia’s “balancing” strategy in Africa seems to preclude the involvement of its active personnel and instead relies on a combination of contractors/”mercenaries”, diplomats, and companies, all of which come together to create a mixed model of kinetic (military) and non-kinetic (socio-economic) means for stabilizing some of the most war-wrecked states in the world such as the CAR (which is regarded as the world’s poorest country).

All told, the model of “Democratic Security” that Russia is perfecting in the CAR is so worrisome for the US because it could undermine America’s plans to employ Hybrid Warfare strategies against China’s investments there, thus making the People’s Republic dependent on Russia’s “regime reinforcement” services in order to maintain and expand its presence in Africa, which could in effect crown Moscow as the kingmaker of African geopolitics in the future and give Washington a real run for its money there.

Note to readers: please click the share buttons below. Forward this article to your email lists. Crosspost on your blog site, internet forums. etc.

This article was originally published on Eurasia Future.

Andrew Korybkois an American Moscow-based political analyst specializing in the relationship between the US strategy in Afro-Eurasia, China’s One Belt One Road global vision of New Silk Road connectivity, and Hybrid Warfare. He is a frequent contributor to Global Research.

Republicans Want a White Republic. They’ll Destroy America to Get It

The End of White America Is Now Assured